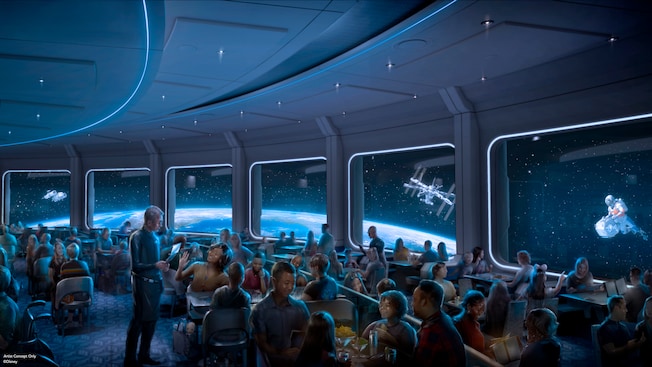 Dine among the stars at an all-new restaurant that’s out of this world – opening this winter!

Does this mean reservations are open?

jldeahl said:
Does this mean reservations are open?
I went into My Disney Experience and checked on dinning for our dates..I am sorry to report Space 220 did not come up for the last part of Jan. and the first week of Feb. Thats ok.. we are excepting the fact it wont happen on this trip. That is way we keep going back .. It is a love hate relationship!

jldeahl said:
Does this mean reservations are open?
Click to expand...

No. ADRs are not open; they don't even have the menu posted yet. However, having an official page is the first step toward ADRs being available.

Dine among the stars at an all-new restaurant that’s out of this world – opening this winter!

Disney life. I am a happy wife.

Sorry, I am at the point of checking every chance I get for updates, that means every time I wake during the night.

I barely got that link pasted and copied.

Wanted to add no ADRs or menu, but toooo tired...

I had the feeling it was coming, they took down the DB link they had on the site last night.
I am hopeful things will be updating soon for the rest...maybe...

Not yet. It will probably be added later on. Rest of the groups' restaurants do accept the plan.
N

Space Restaurant will open at Feb/2020. Any probability of a soft opening by the end of Jan/2020?

I’m almost more anxious for the menu than the ADR’s. I’m hoping it’s something we’ll want to eat and not just another BBQ type place.

Is there a way to get notifications on ADRs being available? My 180 day window opens soon, and with a Feb 2020 opening, wouldn’t we expect ADRs to be made available soon?

McGirth said:
Is there a way to get notifications on ADRs being available? My 180 day window opens soon, and with a Feb 2020 opening, wouldn’t we expect ADRs to be made available soon?
Click to expand...

We don't even know if they're going to take ADRs in the beginning. And if they do, they may load them right before. They don't usually use 180 as a consideration for when they load a new restaurant to the ADR system.

tinkerbelletreasure said:
I’m almost more anxious for the menu than the ADR’s. I’m hoping it’s something we’ll want to eat and not just another BBQ type place.
Click to expand...

So far they have talked about having "international cuisine" so I wouldn't expect anything close to BBQ. I could also see some creative platings and use of molecular gastronomy

TheMaxRebo said:
So far they have talked about having "international cuisine" so I wouldn't expect anything close to BBQ. I could also see some creative platings and use of molecular gastronomy
Click to expand...

they've since changed the description of the type of food ...

Donald - my hero said:
they've since changed the description of the type of food ...View attachment 457317
Click to expand...

Oh thanks! Still seems rather vague ... Will be interesting to see!

Watching, waiting, getting hungry. Going Feb 4. If I can't get into RotR, can I at least go up in space?

Just hit my 180 and got Hacienda at night as my only booked meal in Epcot (I did RC 2 years ago before Disney monetized those of us who figured out where to see the fireworks for free with our meal), leaving me open to get 220 for B/L or to replace Hacienda at dinner.

I have honestly low expectations for the meal considering the ownership group, but willing to cast the die for what Imagineers can do with immersion.

Donald - my hero said:
they've since changed the description of the type of food ...View attachment 457317
Click to expand...

This is what has me concerned it might be another BBQ place. What do they consider modern American food?That seems to mean burgers, hot dogs, or BBQ at a lot of places

I dont care what king of food they sell. I'll be very happy to get there and have a drink. I'm usually disappointed by the food at Disney anyway.
T

Modern American Cuisine
The term “modern American cuisine” is often stretched to include a panoply of cooking styles and restaurant concepts, but in its narrowest sense it connotes the fusion of traditional European and Asian classic cooking techniques with a stress on high quality, fresh, locally produced, in-season, often organic and healthful foods. One of the pioneers of this style of food preparation and presentation was Alice Waters, who in 1971 founded the Chez Panisse restaurant in Berkeley, California.
Modern American cuisine is popular, and hence has spawned many imitators; the best chefs combine crusade-like ingredient activism—supporting local artisanal producers and farms, for example—with a top-level handle on cooking techniques and presentation. It is unfortunately possible to find mediocre, “try-too-hard” examples of this cuisine all over the United States, often in over-priced venues. The simplicity inherent in modern American cuisine is not always easy to obtain. The innovators and dedicated local chefs produce modern American cuisine with imagination and consummate skill; the casual bar/restaurant or hotel dining room that jumps onto this bandwagon often produces little more than a meaningless mash on an over-garnished plate. Whether done properly or not, modern American cuisine tends to be expensive.

Modern American menu items can vary infinitely, though in general they do not match the standard comfort foods widely available on the conventional American menu. Rightly or wrongly, these menu items may sound affected or pretentious. The diner might begin such a meal with a salad of fresh field greens, warmed goat cheese and caramelized pecans, a cream of zucchini soup with a hint of nutmeg, slivered poblano pepper and roasted garlic croutons, a small plate of skewered chicken in a Singapore peanut sauce, perhaps pan-seared sea scallops in a reduced balsamic vinaigrette. The main course could be a free-range chicken filet with asparagus polenta over a bed of steamed bok choy, or Dover sole with artichokes and sun-dried tomatoes, roasted butternut squash and fresh egg vermicelli. Dessert, in addition to fresh local berries and an artisanal cheese selection, might include exotic items like Earl Grey tea sorbet or wildflower honey and ginger cake.

Because there is no intrinsic limit to the variety of foods and combinations that can be thrown under the rubric of modern American cuisine, the genre is open to unlimited abuse. That said, the movement itself has spawned a wonderful array of artisanal producers and growers in every region in the United States; it is a positive trend that can only serve to improve American cooking in all its aspects over the long run.
You must log in or register to reply here.
Share:
Facebook Twitter Reddit Pinterest Email Link